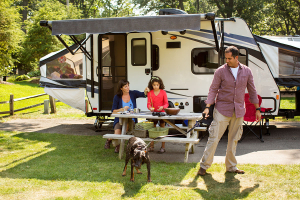 A Senate companion bill to H.R. 3552 – The Travel Trailer and Camper Tax Parity Act – was introduced last month by U.S. Senators Joni Ernst (R-IA) and Angus King (I-ME). Earlier this year, U.S. Representatives Jackie Walorski (R-IN) and Dina Titus (D-NV) introduced legislation to fix a provision in the tax code so all types of RVs, including travel trailers, are treated equally. The bill has the strong support of RVDA and RVIA “These made-in-America products will play a vital role in our economic recovery, but one provision in the tax code is putting certain RVs at a disadvantage. This commonsense bill would fix that by restoring tax parity so all types of RVs – including travel trailers and campers – are treated equally,” said Congresswoman Walorski. “The RV industry generates over $1 billion for Nevadans each year,” said Congresswoman Titus. “Travelers who use both towed and motorized RVs create jobs in our state and there is no reason
these vehicles should be taxed differently. This bipartisan bill would help boost regional tourism in Nevada and across the country.” “This correction fixes an oversight that was made when Congress enacted like the Tax Cuts and Jobs Act in 2017,” said RVDA President Phil Ingrassia. “This bipartisan will ensure the RV
industry can fully unlock the benefits of tax reform.” Under tax reform act, a deduction for interest paid on RV dealer inventory inadvertently excluded non-motorized RVs. As a result, the full tax exemption now only applies to motorhomes, putting travel trailers at a disadvantage. The Travel Trailer and Camper Tax Parity Act would restore the full deductibility of inventory financing interest for all types of RVs, including motorhomes, travel trailers, and campers.