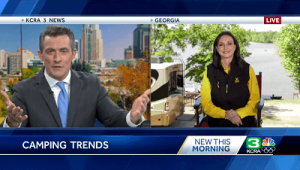 Kampgrounds of America (KOA) sent its President and CEO Toby O’Rourke on a satellite media tour to share findings from the 2021 North American Camping Report and talk continuing camping popularity.

O’Rourke’s journey completed April 21. Appearing live from the Greensborough KOA Holiday at Lake Oconee near Atlanta, she kicked off the camping season by participating in 29 interviews with U.S. media outlets.

“Camping saw a big increase in interest during the pandemic as people wanted to safely reduce stress,” O’Rourke said during the interviews. “We estimate over 48 million households went camping last year including 10 million that started camping for the first time. Our trends are showing that they are going to continue camping this year.”

KOA stated the segments have so far have garnered more than 15 million impressions. Six interviews have yet to air.

The 2021 North American Camping Report’s prediction for a successful year in the industry was supported by O’Rourke, backed by KOA’s own “impressive business results.”

“Our business is booming,” O’Rourke said. “KOA is up 30% over 2019, which was our best year in the 60-year history of our company. Advanced reservation deposits are also up almost 60%.”